Issue 915 of Rolling Stone Magazine published on February 6, 2003 included a surprise article that introduced its readers to a special report about bug chasers. The cover featured an article many readers may not have expected to see in the magazine, which included a cover sub-headline that read “The men who long to be HIV+”. The article, written by Gregory A. Freeman, ended up becoming a controversial piece of writing that marked the moment when Rolling Stone readers were introduced to bug chasing using questionable data that readers may have trusted, based on it coming from an established magazine.

The bug chasing article began on page 44 of Issue 915, starting with the title “In Search of Death” and for anyone who might have been confused by what that meant, the subheading aimed to clarify this by stating “To bug chasers, HIV isn’t a ruthless killer. It’s a gift – the most beautiful a man can willingly receive – spread through a secret breeding ground.” An image accompanying the headline featured a man who appeared to be naked (he might be wearing socks), with his laptop computer covering his genitals, along with a quote in the corner from the article subject that reads “It’s my dirty little secret.” The article was splashed over several pages and introduced Rolling Stone readers to the act of bug chasing, to give them a taste of something different.

Who knew that an article about gay men wanting to get infected with Human Immunodeficiency Virus (HIV) would appear in a magazine that had a primary focus on music, movies and the entertainment industry. The magazine cover for this edition highlighted much of what you would expect to read in a music and movie centric magazine by informing readers they could expect articles about 50 Cent and his life and crimes, what Shania Twain knows you like (does she really?), Billy Corgan gets a mention too, along with Missy Elliot, Bruce Springsteen and Phish. Then something unexpected can be found positioned in the bottom right hand corner of the magazine, just above the barcode highlighting a special report about bug chasers.

The article was shining a light on bug chasing, then suddenly the human faces of bug chasers began to emerge from what was considered part of a secret unground world. Louise Hogarth introduced us to Kenboy and Doug Hitzel in her bug chasing documentary “The Gift” and Gregory A. Freeman introduced us to Carlos (not his real name) in his Rolling Stone article. Using the stories of people makes bug chasing more real by adding emotion, because without people, bug chasing might not really exist in the minds of those who don’t know much about bug chasers, so by including real people who chase the bug and are seeking the gift, bug chasing comes to life.

In the British Medical Journal (BMJ) Volume 326 released on February 22, 2003, San Francisco based freelance scientist writer Ken Howard and Gavin Yamey, the deputy physician editor of Best Treatments reviewed the Rolling Stone article using the headline “Magazine’s HIV claim rekindles “gay plague” row.” Their review of the Rolling Stone article highlighted what makes the Rolling Stone article controversial – the figures used in the article. When questioned, Rolling Stone revealed that its data came from an interview with Bob Cabaj, who is a psychiatrist and the director of behavioural health services at San Francisco’s department of public health. When Cabaj was contacted by BMJ, he stated that he never mentioned any figures on the prevalence of bug chasing to the author of the article, and distanced himself from the figures quoted by stating he did not have any data, but explained to the author of the article that it was probably more common than people wanted to think.

So what are these figures that make the Rolling Stone article so controversial? Reference was made to 40,000 new infections in the United States per year, with around 10,000 of these infections attributed to bug chasing. The article was inferring that 25% of new infections were specifically the result of bug chasing, a figure that’s extremely high and overinflated. Andrew Sullivan wrote an editorial on Salon.com referring to the Rolling Stone article being “riddled with unbelievably shoddy work” based on the 40,000 figure referring to all HIV infections per year, with 42% of these infections involving men who have sex with men, which reduces the number of bug chasing infections considerably, even if 25% is still the figure being used.

It’s not just the figures that were designed to create controversy, you can detect this as you read between the lines, starting with the headline and first paragraph, where it’s easy to draw the conclusion as to how the subject matter is being portrayed. Then thirty-two (32) year old Carlos was made to seem like a shallow individual, questioning whether his coffee has been made on whole or skim milk, pointing out that he was worried about his looks, but not worried about contracting HIV, which would have resulted in body wastage had the virus progressed to AIDS. When I first read the headline and first paragraph of the article, I was thinking to myself “here we go”, as it sounded like the author was already blowing bug chasing out of proportion, but the article does generally maintain neutrality.

The author was able to capture Carlos’ emotions as he explained why he wanted the virus and how he would feel after he became infected. Being able to put a face to bug chasing helps the reader appreciate what is happening through this connection, which then allows you to achieve insight into what this person is thinking and feeling. If you can put aside the questionable figures and some of the angles the author appeared to be aiming for to trigger emotional responses to those reading the article, the article does actually contain some useful insights.

It does seem as though the author did research these bareback websites quite thoroughly, as he noted some usernames that stood out, such as “BugChaser21”, “Knockmeup”, “BugMeSoon” and “PozCum4NegHole”. Carlos used the screen name “ConvertMe” and stated that he wanted a man “to fill me up with that poison seed” and to reinforce his desires, he used the AOL Instant Messenger name “Bug Juice Wanted.” It does seem as though the article author successfully managed to shut down a Yahoo! Group promoting bug chasing called “barebackover50” that was established in 1998 and had 1,429 members at the end of 2002 after Rolling Stone inquired about it, so you can gather from this that the author wanted his concerns to be heard by others.

The article also touches upon “The Gift” documentary and points out that Doug Hitzel regretted being infected intentionally after six months of trying at age 21, although the article did not mention Kenboy, who featured prominently throughout the documentary. Gregory A. Freeman also reached out and interviewed a number of other individuals, including San Francisco based psychiatrist Bob Cabaj, who, according to the article, provided the questionable figures. You can find some insight in this article, which does have some interesting parts and is a good read, but it’s important to consider that some aspects of the article reveal that the intention of the article is questionable.

Getting back to the original question about why a magazine focused on music chose to run such an article, well perhaps this was to make bug chasers “face the music” by having to deal with the public backlash after such an article was published or perhaps the magazine wanted to branch out and try something different or even just sell more copies of its magazine and help promote its brand. Whatever the case, when you think about bug chasing in the media, you will most likely think about the Rolling Stone article. 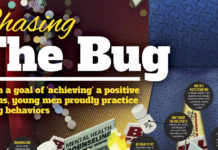 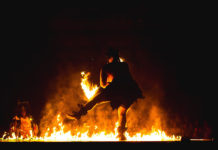 Barebacking and Bug Chasing ’A Deadly Dance’ According to Newsweek

Freeman’s article, upon my first reading when researching this community, still does major harm than good in my opinion. Just the conflated stats, portraying some individuals as pitiful, and some generalised homophobia. It’s good that it got the word out so more research and awareness could manifest, just wish it was done by someone who wasn’t so academically dishonest and capable of reporting on social phenomenon like this!